Alberobello and the Valle d’Itria.

it’s an article by Italia.it – italia.it

The Valle d’Itria welcome the visitor with unmatched olive tree groves, trees born from a red soil that perfume and makes the landscape around a succession of wonderful chromatic effects.

Perhaps due to the white of the buildings or due to the vegetation that frames them, every town and every village of the valley, is wrapped in a magical, almost fairy-tale atmosphere. 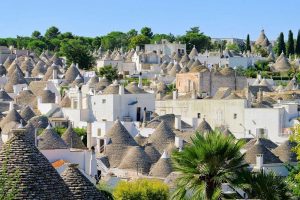 In the heart of the Itria Valley, Alberobello is a must-place to visit with its trulli, a UNESCO site listed in the World Heritage List in 1996. It is impossible not to be fascinated by a walk along the streets of Monti and Aja Piccola.

In the valley there is not only Alberobello. The country sourrounding is scattered about beautiful villages with typical buildings: just think about Cisternino, which rises in this area called “Murgia of the Trulli” counted, together with the nearby Locorotondo, among the most beautiful villages in Italy. Mentioned until the mid-eighteenth century “Luogorotondo” for the characteristic roundabouts of the historical centre.

Between Bari and Taranto is located Martina Franca, the most populated town in the Itria Valley, well-known for its beautiful Baroque architecture and the same musical festival. 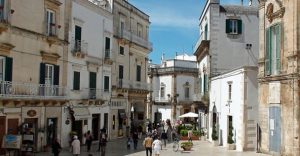 Then, there is the White City, the only one in the valley with a balcony on the sea: Ostuni. Called White city due to its characteristic old town, once entirely painted with white. Ostuni is together with Taranto and Santa Maria di Leuca, one of the ideal vertices of the Salento peninsula.

Absolutely to do a “trip to the center of the earth”, to the Caves of Castellana (in the municipality of Castellana Grotte), where Grave, the first and largest cave as well as the only one connected to the outside, and then the White Cave will leave speechless words to any visitor. 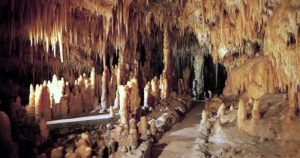 In Alberobello, among the trulli, local association organize in a spectacular scenery the Living Nativity, in December, and the Living Passion during the Easter period.

In Martina Franca, in July, since 1975, you find the Festival of the Itria Valley.

On the hill overlooking the elegant village of Fasano, you find the homonymous selva “Selva di Fasano” inside which you find the Zoo Safari, a park suitable for children and old people who offers the visitor a truly amazing experience; Over 40 animal species to discover into the wild.

Walking, workshops and tastings at the several educational farms, farms distributed throughout the territory that propose for schools, but not only, direct observation and study experiences, and then manipulations, fruit harvest, participation in the various stages of transformation Of agricultural products, creation of small objects in clay, tasting of typical products.
For example “Sporcamussi”: you can not get up from the table without the dirty mouth of cream and sugar. They are the typical desserts of Bari and Itria Valley, and they got that name because they are so good that, eating them in a single bite, they delight the palate but also they leave traces!