Tipici.news >> HERITAGE >> Mottola, when nature is a set

Mottola, when nature is a set.

Mottola, Wilderness and Caves of God, in the Murge Tarantine among reliefs of deep graves and deep canyons.

Among the most spectacular and even less well-known paths in the land of Puglia there is the Murge Tarantine area, hills interrupted by deep canyons that run perpendicular to the Ionian coast: a rock universe formed two million years ago. 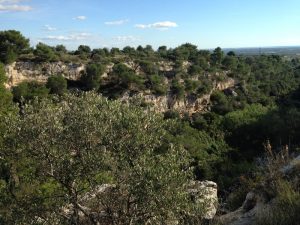 A landscape that catches eyes and fills the soul, among rocks and Mediterranean steppe. Walking on the edge of the cliffs, in the midst of lentisk trees and juniper bushes, it seems to be in a another world, still little traveled by tourism and made of countries perched on the brink of deep canyons sourrounded by orange trees and olive trees.

As Mottola, located on a panoramic hill overlooking the deep blue of the Taranto’s Gulf. 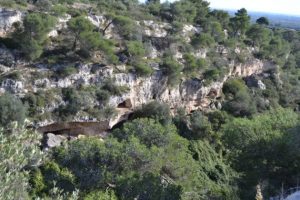 Here is the most spectacular and majestic canyon of Puglia, the Petruscio’s canyon, from the vertical rocky wall painted by caves.

The rock village has developed on the sides of the canyon “gravina” in italian language, within the different levels of the interconnected caves that have been used for centuries as houses, animal shelter, religious worship centers and even cemeteries.

Twisting paths lead to the bottom of the gravina but the most interesting point of observation is the one from which you can admire it right from the center of the horizon: well known to few have allowed us to create spectacular photos that give the idea of how deep and extensive this is Split engraved in the rock.

Mottola also has an old town circular center that hangs on the hillside between intricate streets and steep stairs and many churches, which should certainly be more valued. Located on the top is the 13th century Mother Church. 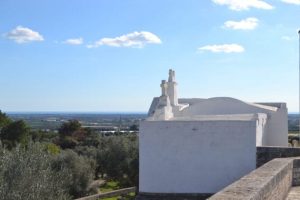 But the most interesting churches are certainly those rupestrian and the most beautiful of St. Nicholas, called the Sistine Chapel of rock civilization, where it remains open in front of the cycle of 24 frescoes dating from the XI to XIV century.

Another singular rupestrian church is the one of Sant’Angelo, which is the only case in Puglia, a two-story hypogean rock church, a typical architectural solution of Cappadocia and the Byzantine world. It is a pity that the frescoes are very compromised by water infiltration, favored by the overturning of the above ground.

Around Mottola there is a real open-air museum between ancient farms “masserie”, trulli, cisterns, rock villages and the “Grotte di Dio” ( caves of god ) dugged into tuffy valleys and immersed in the intense aroma of rosemary, thyme and oranges. And here is the culture of living in the cave, with architectural jewels from the iconographic apparatus of exceptional artwork such as the finely frescoed crypts, real pinacoteche guarded in rock formwork. These are not isolated phenomena, though here they reach a very high level of fine art but fall into a natural, anthropic and cultural habitat typical of the Mediterranean basin, extended from Turkey to Greece, Bulgaria, Cyprus, Georgia, Armenia, southern Italy, Tunisia, Jordan, Israel, France and Spain, and characterized by the use of the cave excavated as a temple, church, dwelling, fortress, village, necropolis. 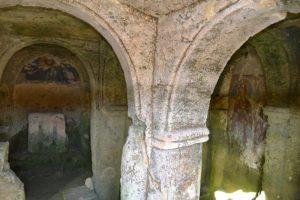 In a small garrison, among rosemary plants and capers and olive trees, rises the church of the Madonna del Carmine or Madonna Abbàsc, partially excavated in the rock that, when it comes to a sunny day, looks like a small clump of Greece in the Apulian land.

To deceive the shape of the upper part of the sanctuary and the murky white of the walls. Legend has it that on April 22, 1506, the Virgin of Carmel appeared in dream to the clergyman Francesco Pietro di Filippo, who rested in the cave where he lived, and ordered him to build a dedicated chapel. Since then, during the Lenten Saturdays, there is a crowded votive pilgrimage from Mottola to the chapel and from many nearby centers.

We relentlessly leave this paradise of peace and devotion. With a promise: we will return to Mottola to visit the much more that the city offers to those who are ready to seize its often hidden sights, cause nature is a set.