it’s an event by La Bautta.

What would happen if bins, for waste collection, would suddenly take life?

Or rather, what would tell us four people who are “living” their own existence as a bin for waste collection?

It’s what us try to find out in the “I Differenziati“, the story of four individuals immersed till their neck in a waste container, drawing almost a hypothetical Dante’s romance, all four involved in a situation that, grotesque, we will discover to be true. 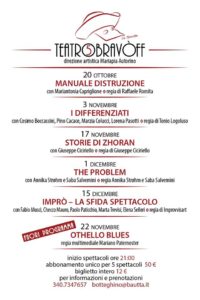 Bravòff’s theatrical event, in its fifth edition, aims to realize a new format in the culture and entertainment proposal, with particular attention to the programming of activities aimed to help young theater companies emerging in the Apulian and Italian context, aiming at enhancing low-cost production excellence.

“We will search our artists, and our theater companies, acting schools, Off spaces, cellars, garages, roads, mental health centers, small theaters, avant-garde laboratories, underground rooms , in the suburban neighborhood schools, and we will recruit our audience, workers, young people, factories, offices, schools, on the street, offering simple and convenient subscriptions to better balance the relationship between theater and viewers. However, it is not a theater for the elite, but a theater for the people who comes from the people, where a freely assembled community is revealed to itself by listening to an art, the more ancient.”