Tipici.news >> LIGHT >> Quentin Tarantino and foods in its films

Quentin Tarantino and foods in its films.

The cinema and food “relationship” represent a visceral relationship.

Since food is one of the fundamental activities for human beings, it is obvious that the seventh art takes care of it.

I found it interesting, the relationship between the Italian-American Quentin Tarantino and food. Tarantino is one of the most discussed postmodern directors.

Tarantino, in my opinion, is an excellent dialogist, a good quotationist, but also a little script and sadist inexpressed.

No polemical desire, I loved him and I had fun with different jobs of this naughty badass, just as I did not like others.

In several of his films, however, there are references to food, often in a pop key, sometimes in more veiled and refined.

I think about, for first, to Royale with cheese into Pulp Fiction movie.

Within a discussion about European oddities, starting from the metric decimal system to finsih with the abuse of mayonnaise, there is the diversity of the names of some “double M” sandwiches on both sides of the Atlantic.

So.. that is the “Quarter Pounder deluxe” (name currently used also in Italy) becomes the “Royale with cheese”, to homage the French impermeability to British neologisms.

Details overwhelmed by the vicious events of the two John Travolta and Samuel L. Jackson, but that come back to memory when the film is re-evoked.

Often Junk Food peeks into the scenes of the former video store clerk.

In “Reservoir Dogs” (in Italian The Hyenas), potato chips, burgers and super-spirits are inseparable companions of the events occurred to protagonists.

In the following “Jackie Brown”, it is chicken with tomato sauce with onions, along with stewed beans and sautéed rice with peas (!) the incentive that closes Chris Tucker in the trunk of the car. 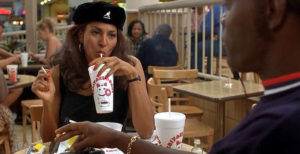 Here too, the spirits are the master, along with the inevitable coffee and beer.

Kill Bill (especially Volume 1), is a triumph of sushi, combined with a resounding error of Italian dubbers.

While the fearsome Gogo Yubari (Chiaki Kuryama) is getting drunk, a friend asks her if she likes “the” Ferrari.

In reality they were talking about the famous Trentino sparkling wine that the Japanese killer was swapping by the bottle, while the dialogue was interpreted as referring to the legendary Maranello red car brand (which is absolutely out of context in the scene).

However, the eastern baby killer does not like Ferrari (de gustibus …). 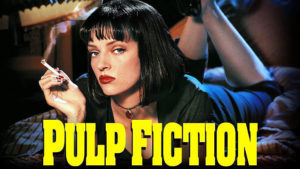 More about the subject of questionable foods, Uma Thurman was seing Bill (David Carradine) preparing a toast with slices, salami, mayonnaise and tomatoes and still does not kill him.

The “Kill Bill” film was also dominated by some tex-mex specialties, such as the nachos of which we devour Kurt Russell.

All this, obviously, washed down with industrial quantities of spirits.

No doubt about it, a healthy diet!

Speaking about healthy diet, for the game of contrasts (probably) in “Inglourious Basterds” the fetish Nazi Hans Landa (Christoph Waltz) prefers milk to wine and is greedy for sweets.

To be precise, in a really well-crafted scene, the Nazi tastes a strudel, while his designated victim is invited to eat one with cream.

How not to eat beans in a western?

Not even Quentin can escape this unwritten rule and so, in “Django Unchained” the tradition of Bud Spencer and Terence Hill was honored, with the famous stewed dicotyledons and accompanied by tasty and simple bread.

It can be said that the recurring feature of the food presence in Tarantino’s films is linked to everyday life. Without giving apparent prominence to dishes but, by contrast, Tarantino made them protagonists by putting them in the background.

Undoubtedly however, Tarantino’s films are not easy to digest, even from the point of view of food. The food complement the events narrated on the screen.

Equally undoubtedly you can not find a delicate touch, but this is well-known if you are a fan of the Knoxville director … 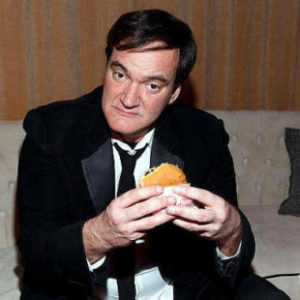