Tipici.news >> ATELIER >> THE FLOWER OF LIFE

THE FLOWER OF LIFE.

it is a news by www.giuinlab.com

A few years ago, while experiencing a  walking around the Valle d’Itria, we reached San Marco one of the several Locorotondo’s neighbors. Since the past, here the countryside was been not too much occupied by men and it was been farmed in each one of its tiny plots. While visiting the medieval origin church San Marco, from this church the neighbor took the name, we spotted a extraordinary stone which was almost like a rose window. This stone still is in the between of the small entrance portal and the bell tower of that San Marco church. This stone was carved in order to obtain several flowers, several flowers so as to have the form of six circles converging in one point. Our curiosity pushed forward us to search for its origin and meaning. 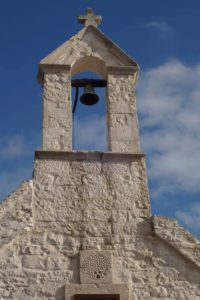 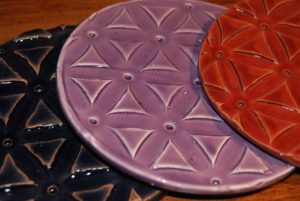 The worldwide diffusion of that symbol is due to the internationalization of the symbols came to us from prehistory. This Flower of Life symbols was adopted by the Church also, during medieval times, as a wish for resurrection.

We can list several interpretations and meanings abut the Flower of Life symbol:

– by the ancient Celts, as the Sun, it was a symbol for moving forward and regeneration, it was connected to the property of ‘giving new life’ both physical and spiritual; it was used to wish “good luck" to newborns, also used for women looking for a pregnancy;

– also it was a symbol for spiritual raising, particularly indicated for those who are walking a personal path into spiritual growth; it was supposed this symbol helps in understanding the Self of each one of us;

– also it was a symbol linked to the number six (the flower is composed of six petals) represents the Creation,that is the wheel of life represents the human life flow.

– also it is the most perfect mathematical symbol, with the presence within it of the “golden number“, this number is considered sacred. 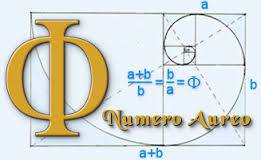 – also, using this symbol we obtain the Metatron Cube, made up of five Platonic solids representing the earth, fire, air, water and the fifth essence elements. 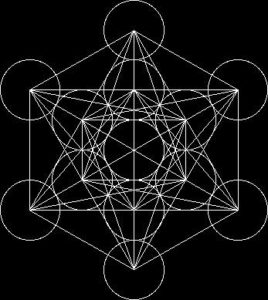 The Flower of Life is perfectly represented into the ancient Temple of Osiris in Abydos,  represented by Leonardo da Vinci also. 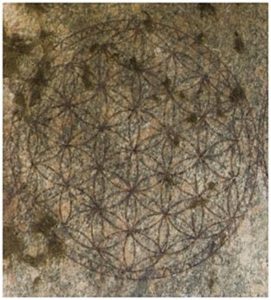 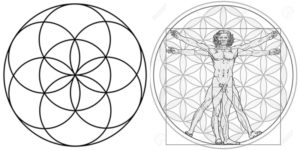 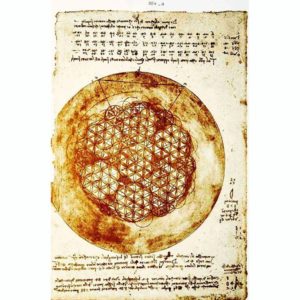 The word “Vesica Piscis" refers to a symbolic figure geometrically composed by the intersection of two circles (with the same radius and whose centers lie one on the circumference of the other). The Latin name, which literally means “fish bladder", came from the shape of this figure. The symbol was already known in India, in ancient Mesopotamia, in Africa and in Asian civilizations, but it spread widely especially in the Christian context, through the association of the figure to Christ. Subsequently, in the iconographic elaborations that followed, especially in the frescoes and medieval miniated codes, the ‘vesica’ is associated with the image of Christ and the Virgin in majesty, in the iconography also known as “mystical almond" 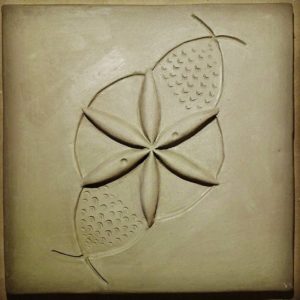 We get inspired by the symbolism of the Flower of Life, it also is a recurring sign in the Apulian tradition (all our projects are been inspired by Puglia). We represented it on our clays design furniture. We created plates and bottle coasters in addition to other objects, using three clays variety (red, white and black) in order to obtain over thirty different shades of colors. That colors are the main identifying feature of Giù in Lab’s ceramics. 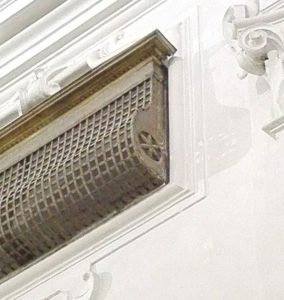 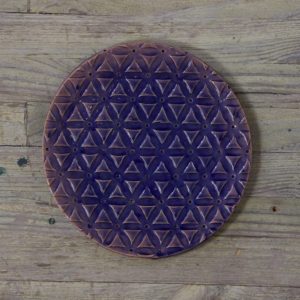 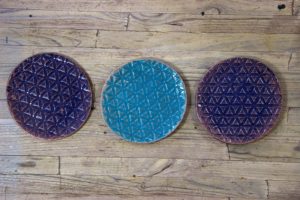 Giú in lab. The territory. Inspired by the context.

The needing in obtain ceramic objects for furniture and for everyday use. It was required by our skills. We are architects recovering and renovating old farmhouses and trulli to use them as summer residences or Ho.Re.Ca. activities. Also we like design and create local and contemporary residences. Those led us to imagine, to draw and to produce objects able to speak contemporary local language which respect traditions. We think ceramics, in addition to representing itself and the intellectual depth of the master who produce them, it must have to evokes a story of the places from which they came, also about the “alive" people who are living that places.

You can discover more about Giú in Lab – Ceramics, Architecture and Design workshop.
(link: www.giuinlab.com)

It is the Anna Dibello and Giambattista Giannoccaro project.
(link: www.giuinlab.com)