Tipici.news >> ALIMENTATION >> Eat that are good for you.. the fava beans

Eat that are good for you.. the fava beans.

Eat, that’s good for you, patiently solicited the grandmother, while the granddaughter was in front of a soup with pumpkin and beans with their skins.

I was wandering with obstinate slowness my spoon for the dark and dense bottom of the pot, in the undertaking to remove all the pieces of pumpkin from unwelcome contact with the fava beans, and suspicions of pale sparkling garlic pieces, drawned under many rounds of extra virgin olive oil.

I just could not swallow that soup. And it was not even clear to me how it could get me all the good, that my grandmother believed, I thought she lied shamelessly to tempt me to eat.

When I think about that moment, I imagine myself in a painting with farmers around a table lighted by a low light, with my eyes looking to the flypaper hunging from the lamp, trying to count how many flies, flying flying approaching the light, were remaining imprisoned.

While watching them, gingerly pushing the plate towards the center of the table in the hope that some fortunate flyer, in an attempt to break away by the flypaper, was loosing a wing falling inside the plate, saving me from that soup.

But the flypaper was lethal, and mortifying my expectations, that event never occurred.

And even in the case it might have happened, thinking back, I’m not certain that my grandma would have passed to the dog or to the chickens that unwelcome meal.

The grandmother would have pulled away the poor fly and the dish would have remained on the table. Although in that case I might have motivated the refusal asking to replace with bread and cheese…

But how was I confess that I did not fill the spoon because I was afraid by the fava beans? And that it was because of those their thin lips curved, that made the fava beans alive and grinning at may eyes. I did not bring it to my mouth!

With my eyes fixed on the plate, I used just to say: “I do not like!”.

And my grandmother, to respond: “But if you have not yet tasted!”.

And I, to close that tight exchange of words: “I just know it!”.

At that point, my grandmother, with a deep sigh, was convinced to eliminate the fava beans, which were the ones that made me better than everything, and I used to scrape up and ate all the pieces of pumpkin, taking them from the cooking liquid in the pot.

It was not bad, but, although I began secretly to familiarize with that flavor, I continued to eat slowly demonstrating a sad expression, to show despite the removal of the legume all the effort that cost me to please my grandmother.

So, slowly, thanks to the taste mediated by those pieces of pumpkin, I have learned to accept the complete pot and appreciate that solid and precious soup with fava beans. 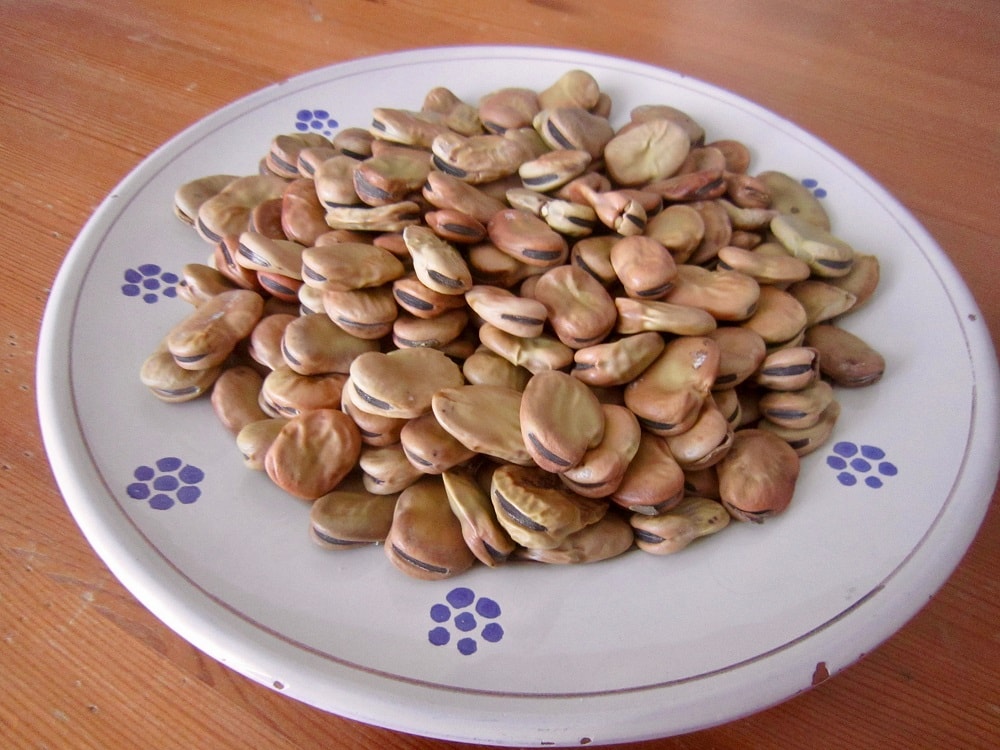 And I realized, after some time, that the grandmother was not lying urging me to eat that plate of beans and pumpkin, and that her confident and affectionate “eat that is good for you”, no matter what food she was referring (garlic, pumpkin or beans with peel were all products of her farming work) was convinced, sincere and conscious.

My grandmother lovingly cared for her fields while my grandfather was in America, and she particularly kept me to eat the fava beans because, as a good farmer she was, she knew and liked by experience both the taste and the beneficial properties.

They were easy to be cultivated and had beneficial effects on the soil ground. They could be enjoyed fresh in the spring, after being pulled out of the skin, alone or accompanied by bread and sheep’s cheese, or they could be enjoyed dry in the winter, with peel or without, in soups and tasty soups, fried or cooked in the ashes.

My grandmother did not definitely know terms such as nitrogen, minerals, folic acid, potassium, antioxidants, herbal and fiber plant sterols, nor the names of all minerals contained in those beans, and even how long existed on this earth and where they came from . It was enough to know that there were, and they were very good to cook and useful to “move my bowels” regularly, to maintain a low body pressure and, as they were rich in iron to treat anemia. What more could do you want from a fava bean?

Every good farmer, in the past, had within him a natural sailed pharmacist, expert not what they contained certain foods or herbs, but for what they were useful to treat or prevent.

My grandma was a good farmer.

And hers “eat, which is good for you” was the right thing to say.

But who knows what would have thought, if I’d revealed that those beans would come a long way, and 50 years later would come up, but much higher than any other legume contemplated in fables.

Because a courageous and determined Princess would travel between stars, planets and blacks holes always taking with her beans, lentils, fava beans and black chickpeas, confirming her healthy eating habits and the fact that, in fables, between princesses and vegetables has always been there a certain feeling.

My grandmother would probably listen to me with her holy patience and despite the scientific side of this revelation, she probably had taken the advantage of my fantasy, and would say: Have you seen?

She bring with her because they make her feel good!

So, stop making all these moaning, and eat!

My grandmother used to put the fava beans in water in the evening.

The next morning she passed, in a clay pot called “u ‘pignatidd” setting it into a corner of the chimney, with bay leaves, pepper grains and water.

Then she used to cut an high slice from the central part of a large onion, dropping them on the mouth of the pot.

I never wondered if she use to do that to replace a lid or to take advantage and use the steam even to cook the onion, then she ate apart seasoned with extra virgin olive oil and salt.

Every time she went to check the cooking status, she added if necessary, more hot water that was holded in a small saucepan. If necesary she used to regulate salty.

Meanwhile she cooked pumpkin, cutted into large pieces, and kept aside in a plate covered by another plate, under a table cloth.

When fava beans was right, she pulled out of the water and added to the pumpkin, adding salt if necessary and small pieces of garlic, and a generous amount of extra virgin olive oil.