Tipici.news >> COM >> Ecotopia: the novel of our future

Ecotopia: the novel of our future.

10 events in Season, 7 out-of-date appointments for a program with the protagonists of the national and international jazz scene. Start on Tuesday 19 September with Paolo Fresu and Uri Caine.

The Music Association “Nel Gioco del Jazz” announces the new 2017/2018 Season titled “Ecotopia“. With the artistic direction of M ° Roberto Ottaviano and the coordination of M ° Pietro Laera, the IX Season is varied, with the greatest protagonists of the national and international jazz scene and with new subscription formulas designed to gain new public.

Dispensa dei Tipici is happy to renew the collaboration with Nel Gioco del Jazz also for this musical season, and will be present at the various events to present a selection of wines, extra virgin olive oil and typical products of Puglia and Basilicata.

All events will be published on dispensadeitipici.it/magazine/events with some gifts and promotions for the Dispensa dei Tipici’s customer.

“Ecotopia: The novel of our future” is a utopian novel written by Ernest Callenbach, published in 1975. The company described into the book is one of the first utopian and ecological company, and had influenced the counterculture and the environmental movement during the 1970s . This reading inspired the title and the implementation of the program of this edition. The Association sustains the idea that the culture could develop wealth and must not bartable for a strong development of things, also the Association sustains the idea that the feelings that must guide every action of “good government” should not be misled by canons that are reaching the critical point of no return. An idea of Culture, through the instrument of Music, which makes possible a utopia along with its eco-sustainable impact.

And, in a word, here comes the meaning of all this: ECOTOPIA.

As always, the Cultural Association Nel Gioco del Jazz, which is reaching its tenth scheduled season, it keeps faith in the initial assumptions by consolidating and enhancing, through greater and more efficient use of media, the relationship with a community that has grown up and has recognized the Association as a driving force in its territorial activities. With its sceduled events, in addition to out-of-date appointments, editorial readings, meetings with authors and protagonists of musical life, involvement of schools, the Association Nel Gioco del Jazz will create a network of interests and a live debate that holds he became interested in the creation of Culture beyond the time of stage-setting and its limited period.

The artistic program will be articulated to make both the knowledge of the genre repertoire as well as the prophetic evolution, involving various musical languages which will find in their intimate fusion an occasion of stimulation and comparison.

For this reason, the Association moves beyond the narrow range of traditions, especially Jazz, to meet the cultured European cultures, the ferment of border music such as rock, hip hop and new electronics , as well as the never sufficiently explored ethnic music and avant-garde.

The new music season includes 10 concerts, 7 out of date shows, editorial readings, meetings with authors and protagonists of the music scene.

It begins on Tuesday 19 September with Paolo Fresu and Uri Caine at the Multisala Showille in Bari.

It continues on Saturday, September 23, with Fabrizio Bosso Quartet and on Thursday, September 28, with an out-of-band concert with the trumpeter Flavio Boltro.

On Thursday, October 5, will be the turn of Enrico Rava and Makiko Hirabayashi on Friday, October 27, Jakob Bro Trio and on Monday, October 30, the BassDrumBone trio.

Another concert out on Friday, February 25th with Novafonic Quartet from jazz-inspired jazz-related repertory linked to tango nuevo.

On Friday, March 23, an original music and dance project Pandaric Flight in collaboration with Dance Company “Dynamic Balance” will be on stage.

The Ecotopia Season will be closed on Thursday, April 27, 2018 with another out of focus concert: Open Project Area, with the same Italian music group since 1972, which has created an original fusion of different genres from progressive rock to freejazz to music e.

The concerts, apart the opening one and the two appointments of ‘Bari Hi End’ will be held in Bari at the Teatro Forma.

To update on all association events, you can download the APP from the official website, www.nelgiocodeljazz.it, Google Store, Facebook, and all tablet, smartphone, and iphone devices. 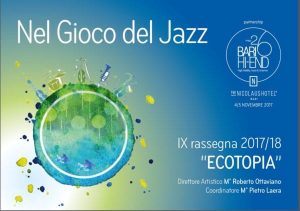