it is an article by Almanacco della Scienza – cnr.it

Unisalento research group and CNR have developed a device for Xylella Fastidiosa Diagnostic.

Scientific Reports, a journal by Nature group, published (Chiriacò, Luvisi et al., Scientific Reports 8, 7376 (6 Maggio 2018)), the result of a joint research group with University of Salento and CNR Nanotec of Lecce. The research was about a microsensor-based prototypal diagnostic device for detecting Xylella fastidiosa on the olive trees. Xylella Fastidiosa is bacteria living and reproducing inside xylematic vessels of olive trees and other plants. 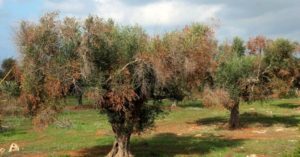 The developed device got ability to identify the pathogen presence, thanks to its high sensitivity. Pathogen afflicts the trees of the Salento area, with rapid analysis times. This is an important first step towards in-situ diagnostics, as a valuable tool in the hands of industry experts for field analysis.

Serena Chiriacò, CNR researcher, says “the two traditional methods have been compared with the new test developed, new test was developed on electrochemical biochips. Results are comparable to those of traditional tests, but with significant costs and time spent for analysis advantages”.

“The development of new diagnostic techniques – commented Andrea Luvisi, a University of Salento researcher – is a useful monitoring resource and an essential containment of the epidemic activity”.

Authors of the publication explain that his work is the result of a solid collaboration between the University of Salento and the Cnr Nanotec. This collaboration allowed a strongly interdisciplinary team composition, with the presence of pathologists and plant physiologists, biologists, biotechnologists and physicists. These have worked together to create an innovative biosensor able to detect the presence of the phytopathogen.

The lab-on-chip realized includes a microfluidic module allowing to perform analysis on small sample volumes. Its performances are competitive compared to conventional diagnostic methods. Further advantages are portability (the whole device measures a few square centimeters), low costs and ease of use.

Once industrialized, the proposed technology can provide a method of analysis made in Salento, useful for implementing a large-scale screening.