it is an article from Coldiretti Giovani Impresa – giovanimpresa.coldiretti.it

With fake news food, for 3 Italians on 4 scary at table.

Three Italians of four (equal to 66%) are concerned about the impact of what they eat on own health, also due to the fake news food on the characteristics of foods that are multiplying in the net and pushing on senseless and even dangerous behaviors.

This is what emerges from the Coldiretti / ixe survey, which was presented at the Coldstream Campaign campaign organized by Coldiretti and the dall’Osservatorio sulla criminalità nell’agricoltura e sul sistema agroalimentare during the training course, organized in collaboration with the Scuola Superiore della Magistratura. 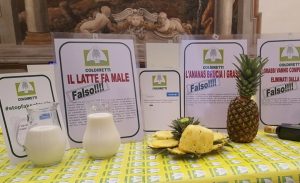 The web is becoming a place in which easily communicate fake news about food with a worrying avalanche effect in a situation where, according to the Coldiretti / Ixe ‘survey, 53% of Italians used it at least occasionally during the year to collect Information on the quality of food.

About 25% of Italians participate in community / blog / internet chat focused on food, which affects purchasing choices in a not always correct and truthful way. “Incorrect food information has a greater weight than in other areas because it directly affects health. That is why we must pay particular attention to and be grateful to those who are committed to revealing deception, “said Coldiretti President Roberto Moncalvo. “The Internet, however, should not be criminalized because it can play an important role in a system where,” said Moncalvo, “food information unfortunately is likely to be influenced primarily by large multinationals through the availability of invested advertising resources.

For us fake news food is also the advertising of oranges that contain just 12% of juice or that of olive oil of great brands that imagine Tuscan landscapes while it contains the one imported from Tunisia or still the ham that is made with pork Germans without any labeling information for consumers”. 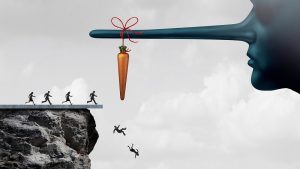